Early this morning it was frosty and misty, but as Chris had an Hospital appointment we thought we would make the most of the day and head to the National Trust property at Stowe as soon as he was finished. What a treat the buggie that takes you down to the main area was driven my a friendly chap who took us right down to the lake. It is a long walk and too much for me. We walked around the lake and enjoyed the sights, while children were on a Pumpkin hunt.

A final hot chocolate in the cafe, we headed for home stopping at the Queen Eleanor Pub for lunch.
Days do not get much better than this.

A visit to my sister

My sister Debbie lives in the Cotswolds and we rarely get to see each other. The last day the girls were with us we took off early and the sun was shining, in fact it was so warm we hardly needed a coat! Debbie lives in the stable block of a large house and Eleanor enjoyed pressing a button to open the large gates so we could drive in to the grounds.

Half term with the granddaughters

I love when the girls come to stay, but they sure do wear me out!  We never seem to stop, even after a walk I was told not to sit in my chair as we HAD to play a game at the table... I would not want it any other way.
Monday I collected them and after settling in we drove to Costco at Milton Keynes as I need to replenish my freezer after the kitchen makeover.
We like to get their early and have a cheap lunch, the four of us had jacket potatoes all with different fillings and a drink for under £9. Then armed with a large trolley set off to shop. The girls could not believe you could buy anything from a hottub to a pack of mince and everything in between. 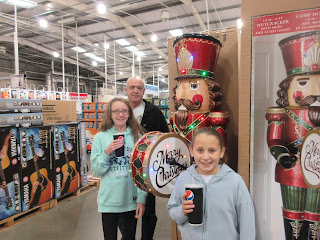 All the Christmas stock was in and Abigail decided she would like twelve of these drummer men, well they only cost about £350 each!!  Eleanor spotted a star she thought would be good for her Christmas tree, it was about four feet high!
Back home all the meat was vacuum packed ready for the freezer by me and the girls. This was followed by more game playing.

Tuesday was BBQ sauce and machine embroidery day.
2 jars of red jam, 2 bottles of tomato sauce, 2 bottles of Worcester sauce, 1 bottle of soy sauce, 1/2 bottle of lemon juice, 2 bottles of honey, with a large tablespoon of mustard and cornflour. It was Hubble Bubble toil and trouble in the new kitchen. 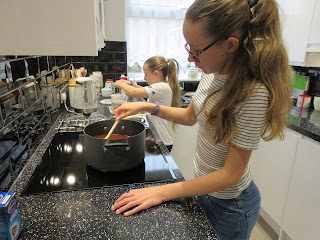 Someone on one of the internet groups I belong to had made scarves with fleece and machine embroidery, so we thought we would have a go. Eleanor wanted a unicorn and do you think I could find a pattern amongst the hundreds I have... no. A quick download from a machine embroidery site and she had the unicorn she wanted.. she made two one for herself and one for her friend. Abigail choose the dark blue fleece and ME an A on it, we also made one for my sister as we are going to visit her on Wednesday.

Working on the new me!

Over the past couple of weeks I have been working on losing weight [AGAIN!] and taking more walks. A couple of the walks were particularly nice..


A local walk often taken is along the old railway line, we usually park the car and go right but this day for a change we went left towards town. There is always something interesting to see and everyone you pass says hello.

Tuesday evening Carolyn Forster was the speaker at the Hamtune Quilters meeting. Table upon table was covered in quilts and her talk covered her quilting life. She was a very entertaining speaker and her quilts were beautiful.

On Wednesday a Perkiomen Valley Quilt workshop had been arranged with Carolyn. Perkiomen is an area between New Jersey and Pennsylvania and had a rich heritage of a certain type of quilt not found anywhere else.

Made of squares and half square triangles we were shown a number of different ways these could be made into blocks and then a seemingly endless number of ways the blocks could then be arranged.

Another hat, hot off the needles!
The pattern was free on Ravelry and designed by Anne Mizoguchi.
I used double knit special by Stylecraft and a circular needle. I love the feel of this 100% premium acrylic and it washes so well in the washing machine.

I now have knitted three hats, so I will be ready for the winter weather.

Other news... today we are waiting for the flooring to arrive and be fitted and that will be the end of the kitchen re-fit. I have put everything away but so much needs resorting as and when I get around to it.
at October 17, 2017 No comments:

What a busy birthday time at the moment.
Sept 22nd Chris celebrated his birthday in Yorkshire on holiday
Sept 30th Abigail reached the grand old age of 14 years ! Where did those 14 years go?
Oct 9th my sister Debbie was 70 years old, and she is my younger sister so I feel really old.
Oct 13th Richard celebrated his 46th birthday quickly followed by Eleanor who will be 10 years old on the 17th.
Today would have been my Mum's 103rd birthday... miss you Mum.

As you can see it has been really busy around here, but last night we celebrated my new kitchen, I cooked a meal for the first time, and Richard and Eleanor's birthdays.

What fun we had playing a penny game, followed by feely bag game.

A week later than usual we held our IAM craft meeting.
Seven of us sewing, making lace, knitting, crocheting and chatting... a LOT of chatting and laughing! The day went really quickly which is always the sign of a good day.

Searching through some cupboards I came across this picture

The frame was falling apart and as I had a cheap picture in another frame the same size, I asked Chris to re-frame it. Much to our surprise there was another photo behind it of my parents wedding. What a treat to find such a treasure. Mum would have been 103 this week.

We are almost there with the new kitchen.
OK the fridge/fleezer is in the hall, the paint is wet, the tiler comes tomorrow plus I have no idea how to use all my new appliances and gadgets! Almost forgot the new flooring will be down next week... but we are almost there !

Monday Richard the fitter arrived to start work on fitting the new kitchen, of course the first piece he wanted was at the bottom of the pile!
Luckily for us Roy came to help as his job had been delayed, this meant work would move along at a faster pace. Although I felt sorry for the people waiting for him to fit their kitchen.
Tuesday again both men were here at 7.30am and did not stop, even for lunch until 3.30pm

8.30 The plasterer arrived to start on the kitchen walls and ceiling... what a mess!

5.30pm  165 parcels arrived, its like Christmas, the new kitchen was delivered into my Happy Room.
Three men carried everything from the truck around the house to the side door at such a pace.


Today is our eldest granddaughter Abigail's birthday hard to believe she is now 14 years old and such a nice young lady. We chat on Face time and so look forward to seeing her tomorrow.
at October 01, 2017 No comments: 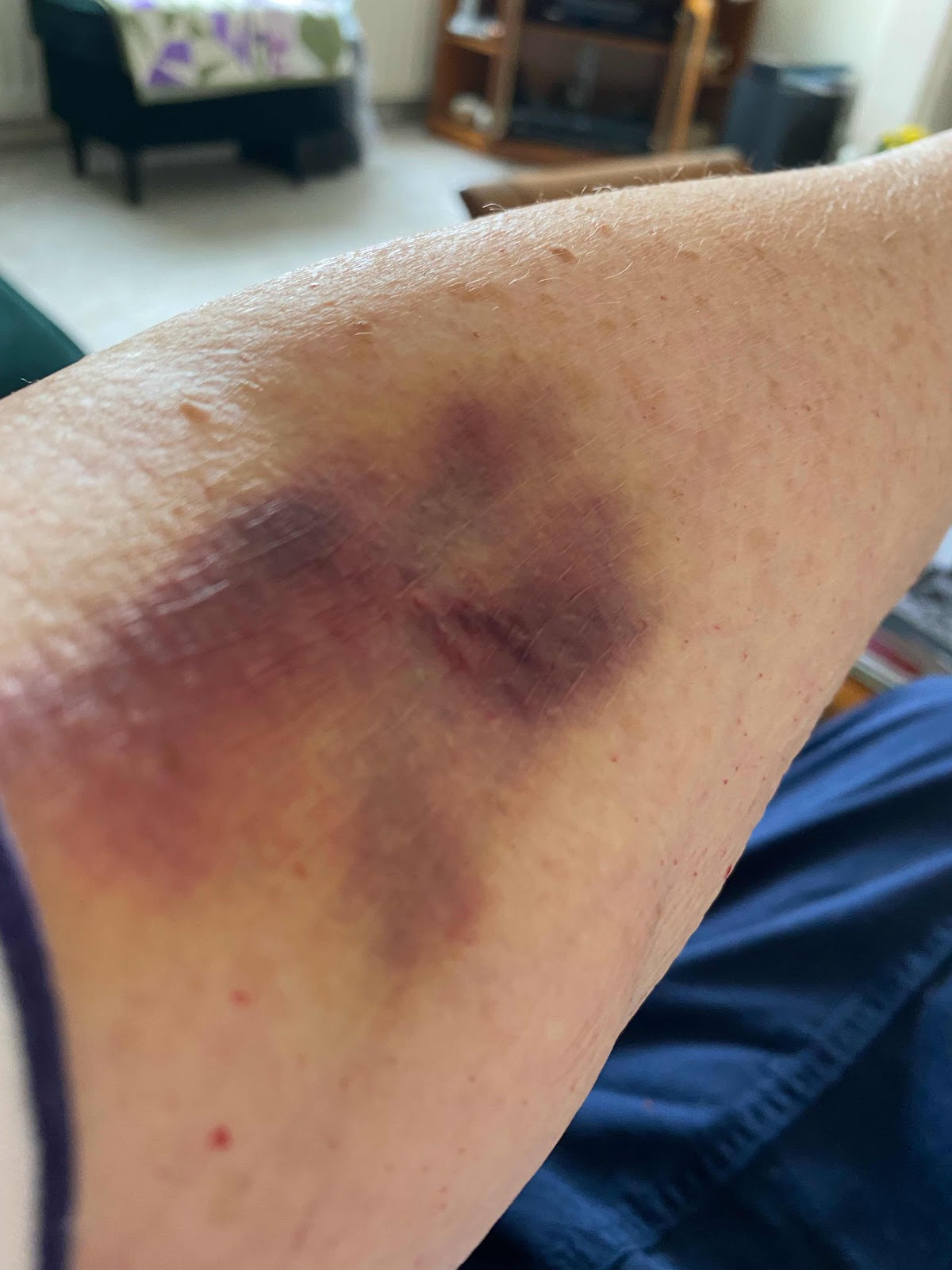